Oilá! You recently released your very impressive “Sampa” scene for UE4. What gave you this idea?

Hello! I already had a pretty good idea of what I wanted to work on as a new personal project: a near-future city with architectural influences from the cities of Sao Paulo and Tokyo (among other sources).

I didn't settle for a specific city or country in order to have total creative freedom though. 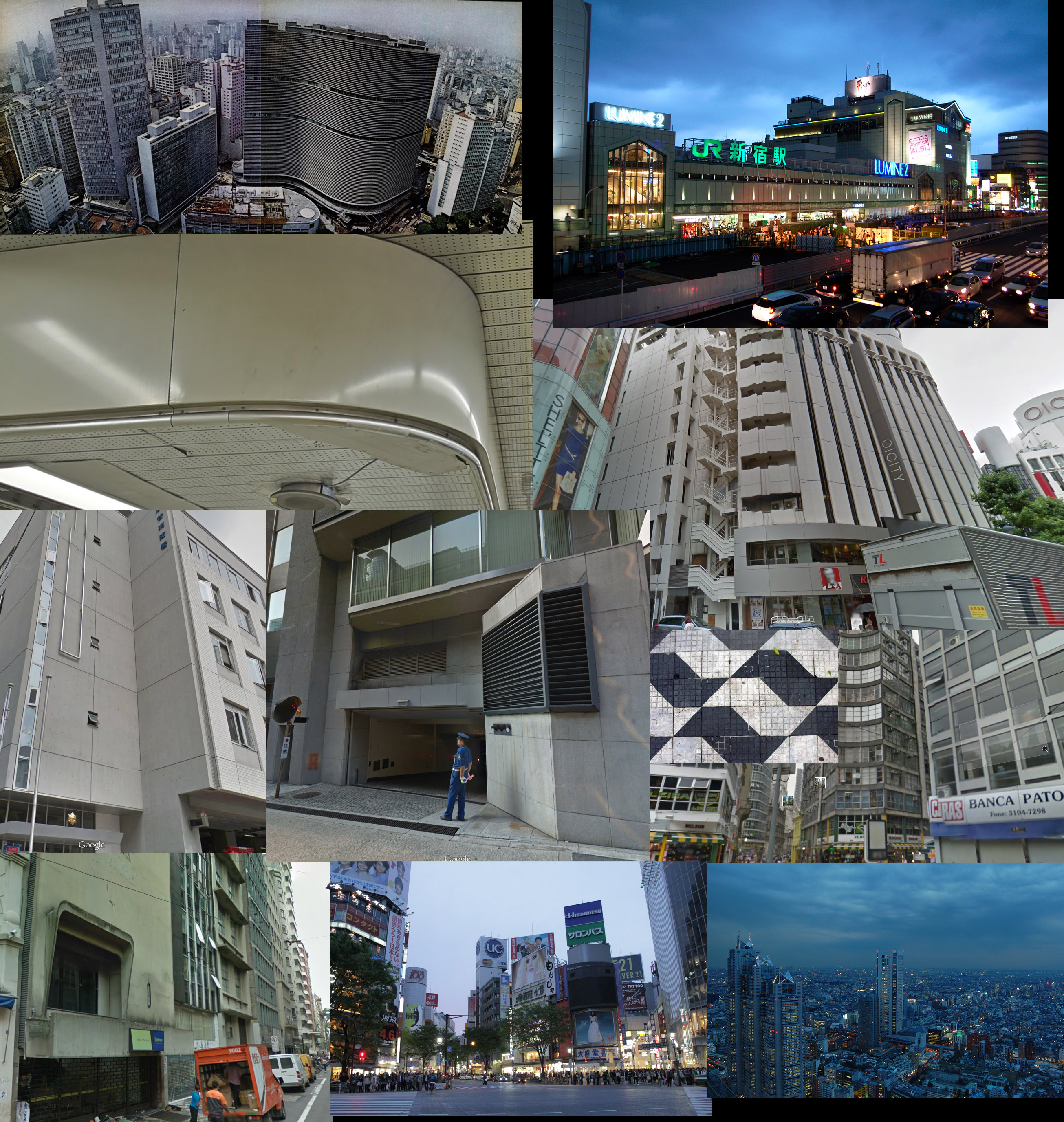 You made everything from scratch. It would be very interesting to go through your entire process for creating “Sampa”. Could you walk us through it?

Of course! But before we start, I want to add that this is by no means a how to guide on how to make environments but more of a general breakdown of my process and the many lessons I learned during this production.

The very first thing I did was to blockout the entire space in 3ds max. I didn't want to spend too much time on this, so I avoided thinking too much about how I would build this and instead just focused on making cool shapes. By importing everything as one single file into the engine, I could quickly check out how the map looked ingame. 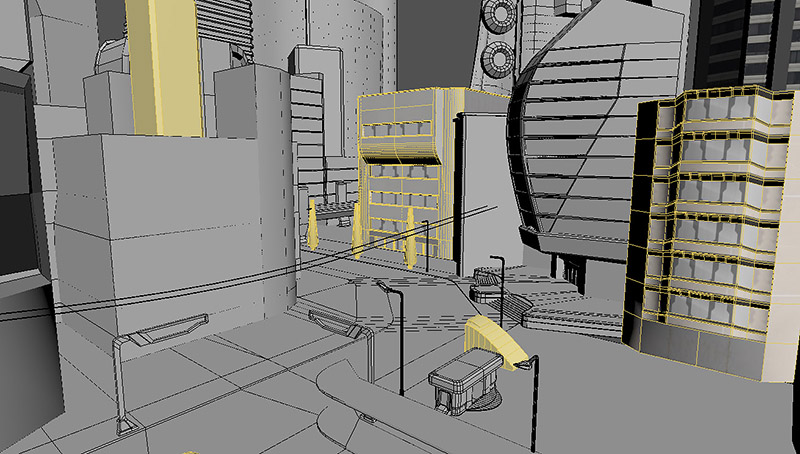 As game artists, we tend to get too technical so modeling blockouts is a great exercise to let creative juices flow freely and focus on art and gameplay. This blockout also enabled me to get the correct scale from the start which is very important when working on urban environments. I always work with a scale model from the ingame character inside my modeling program, this way I can quickly check how high a door handle or a handrail should be for example. The blockout level took me about 3 days to complete and even though the final scene looks nothing like it several ideas did make it into the final level, including geometry pieces.

The initial production phase for this environment was in fact the hardest part that I went through. I started to seriously question if I would be able to realize the full blockout in a timely manner. Learning how to work with PBR materials also took a bit longer than I had anticipated.

I initially explored making every building uniquely on top of my blockout, but after working for days on a single building I decided to go for a mix of unique geometry and modular "lego pieces". I made sure all my unique pieces fit the same grid as my modular pieces so I could mix and match different pieces to get more variation easily. 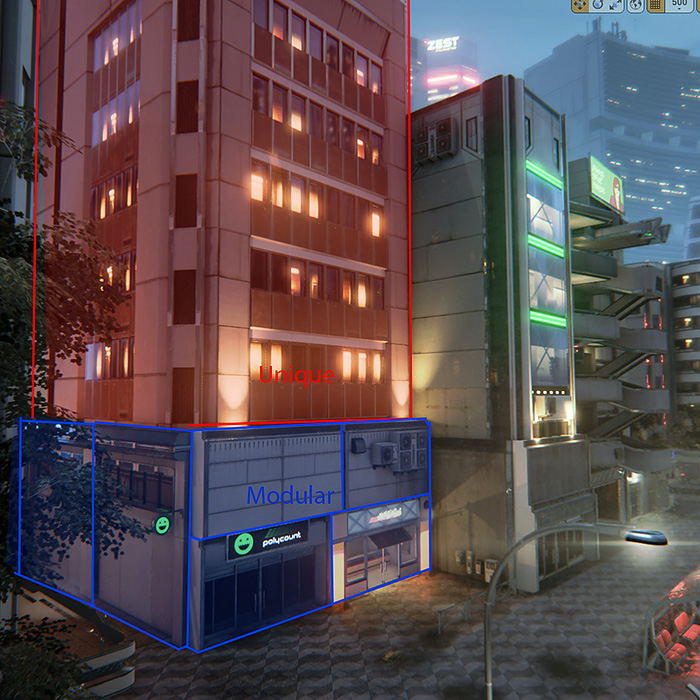 One of the things that was very clear in my mind when I started this environment was that I wanted it to take place early in the evening and leverage indirect lighting and ambient occlusion more than harsh shadows. With this in mind, the basic mood was one of the first things I set up in Unreal. Some people like to do this at the end of a project and while it might be more time consuming to do it as you go (since you will probably be noodling quite a lot more!), this enabled me to learn Unreal's post processing system much better and in the end I managed to get the exact mood I was looking for.

Some of the lighting iterations

At this point I was pretty much certain on what style to go for and how to build this level so I spent the next weeks building modular pieces and small test scenes.

This scene makes heavy use of tiling textures, one big generic trim sheet and a few unique textures. I struggled a bit with PBR materials at the beginning (as was expected) but eventually got the hang of it, and while my materials were not looking stellar they did the job for a while… 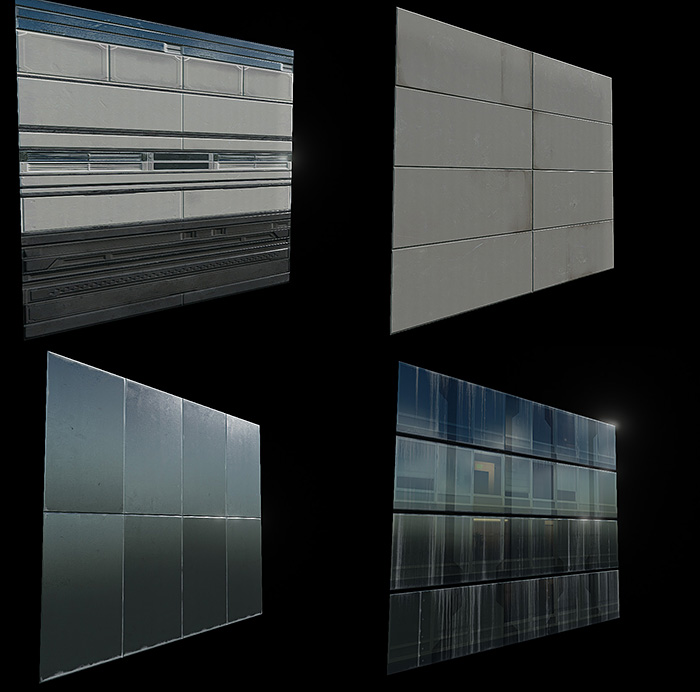 Normal maps were created for each asset as I saw fit. Some of them were baked from high poly models from 3ds max, some were sculpted in Zbrush and some were made entirely with nDo. Normal maps are even more important these days than they used to be, since PBR relies heavily on good normal mapping for lighting. Gone are the days where details had to be faked in the diffuse and specular maps. 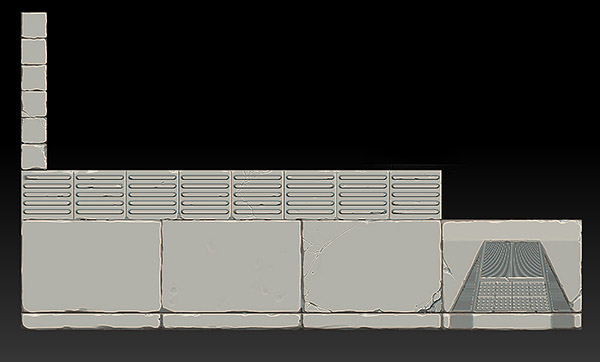 At one point I finally decided that my materials were lacking definition and fine detail and started experimenting with the new Quixel Suite tools. I fell in love with dDo immediately because it gave me exactly what I wanted: Great material bases. I could just add my flavor on top of them.

My process with dDo usually goes like this: I create an ID map to define all the different materials in the texture. I then apply a few basic presets (which give you perfectly calibrated Roughness/Metalness/Albedo values) and once I'm happy with the base I add my own hand-painted details. This proved to be a win-win situation, as it made my materials look much more believable and I was also able to reuse 100% of all the hand-painted layers I had done on the old textures.

Tip: You can get much sharper looking textures in Unreal by changing the “Mip Gen Settings” to Sharpen under the textures’ Level Of Detail settings (double-click a texture map to access this).

Working with PBR can be pretty daunting, especially when it comes to metals, so I definitely recommend exploring dDo or some other automatization tool for texture production, even if you have to tweak them heavily to match your style.

One of the best features of the Unreal Engine is that you can create Material Instances very easily from regular materials. These instances are much easier to work with and save you a lot of time setting up new materials since you don’t have to build a node network everytime you need a new material. One extra benefit of using Instances, is that you can also fine tune your materials much faster because changing instanced parameters don't force a shader reload, whereas saving a regular material does.

A simple material with Albedo, Roughness/Metallic/AO and Normal map support. Original material on the left vs material instance on the right.

I didn't want to create one big material to fit all my needs (not very performance friendly), so every time I created a new material type I also made sure that it could be used for instances.

Some of the material bases I created 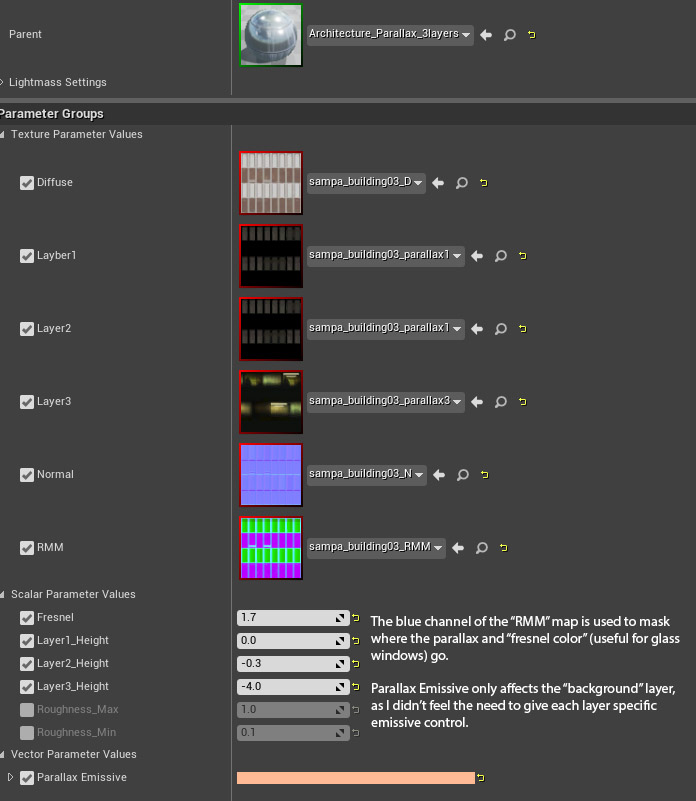 Asphalt: This special material uses World Space mapping with a "stain" texture multiplied on top for large scale details. This material was later reused on a "Wet" version (described below) for the roads.

Architecture_Wet_Dirty: This material uses vertex colors to blend the base material with two other materials: A "dirty" version of the albedo map and a flat 100% reflective material (to simulate water puddles). Explaining what each individual node does is beyond the scope of this article so I'll just leave the shader network here: 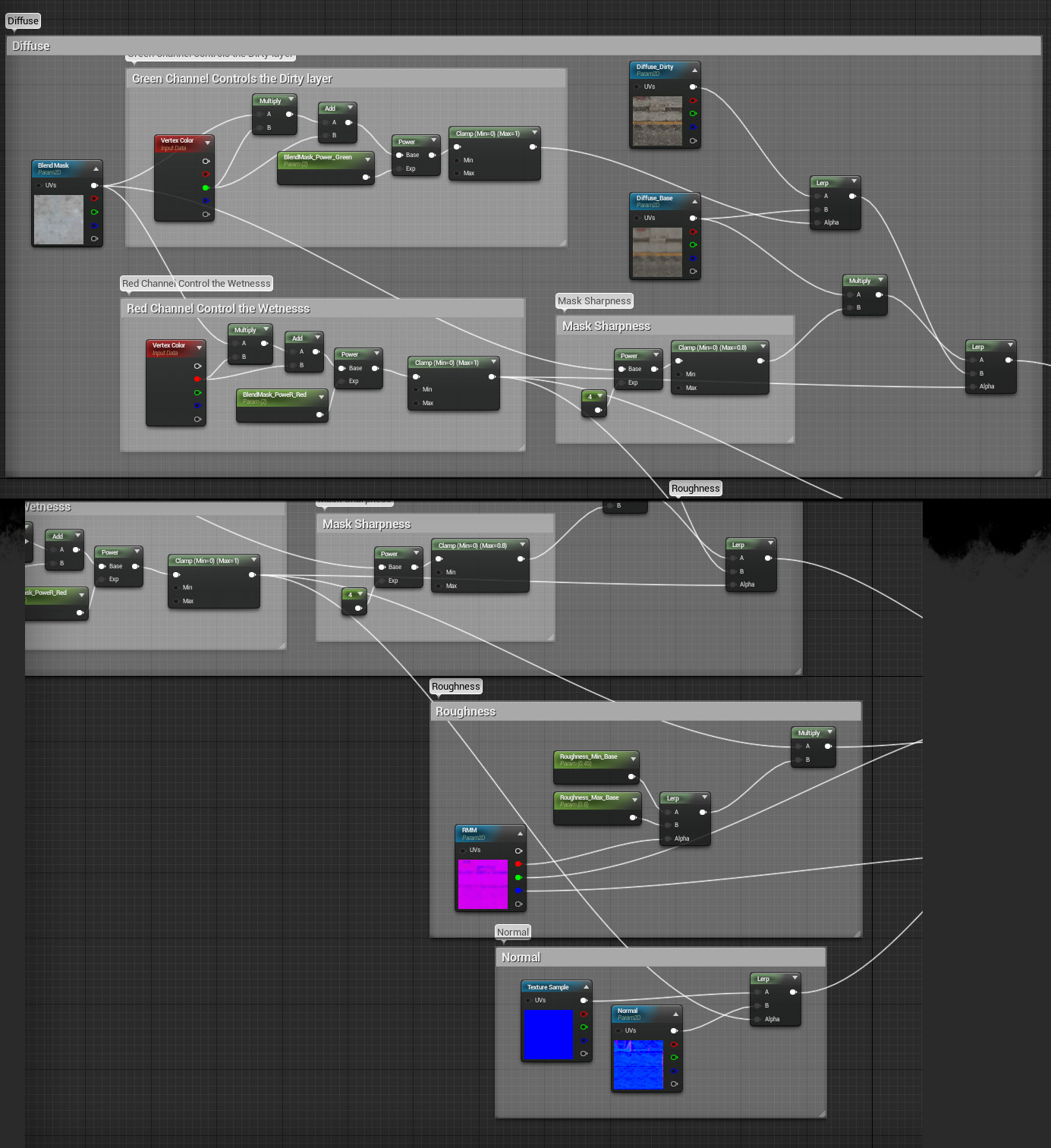 The wet material in action: 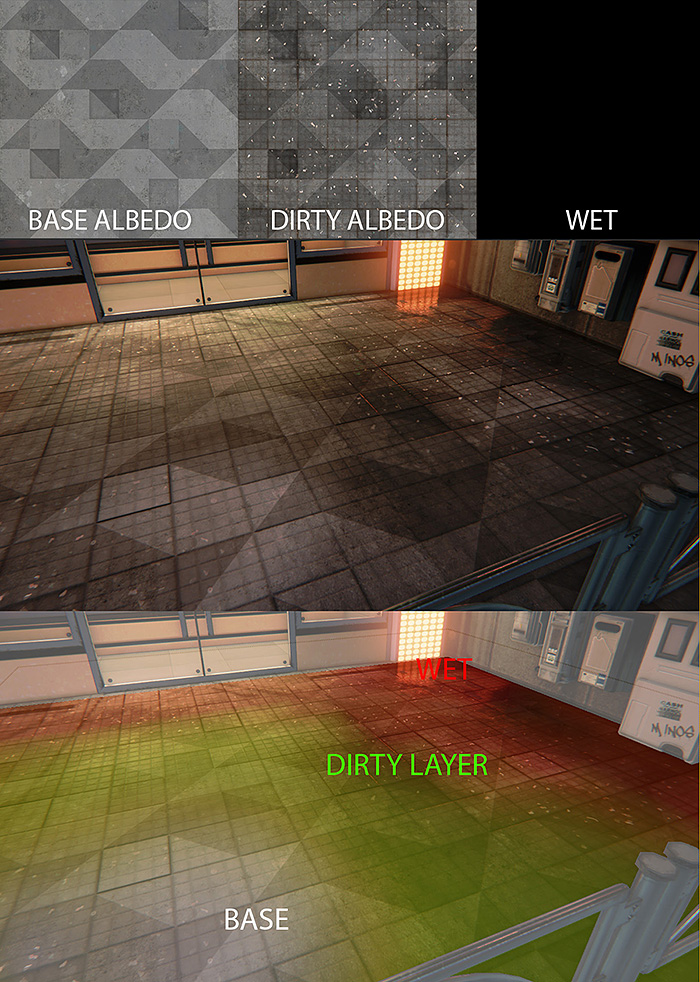 You can create lots of variations quickly using symmetry. The AC kit consists of two base pieces and several variations created with the Symmetry modifier in 3ds Max: 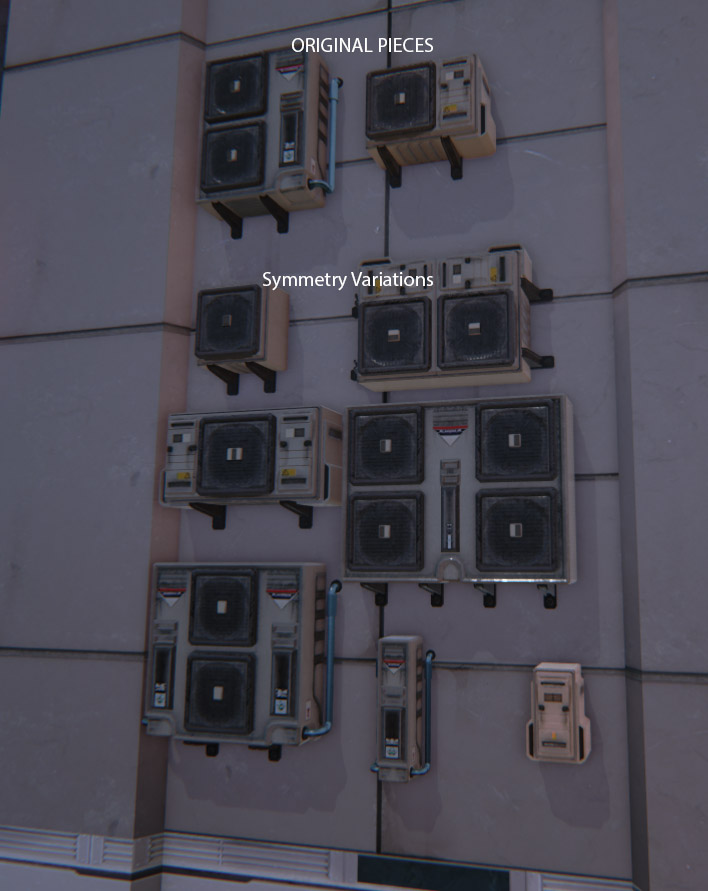 I also used this trick to make more variations out of this Storefront: 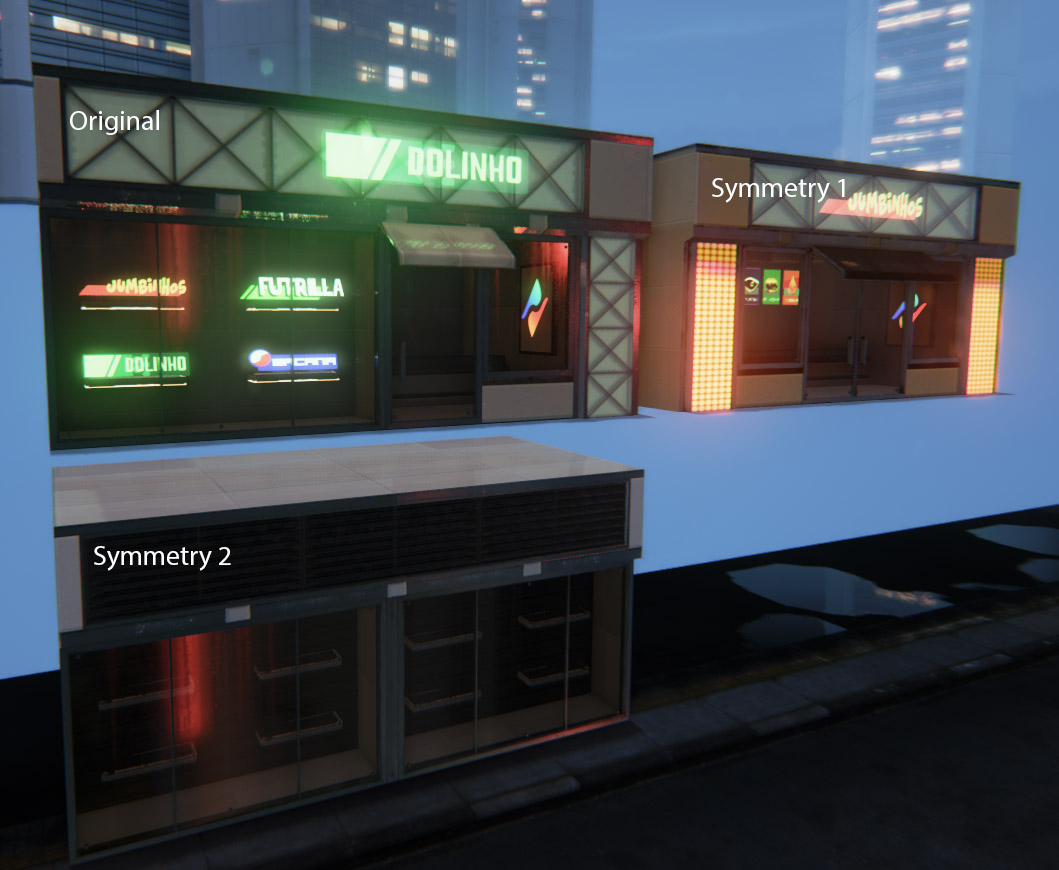 To light this map I used standard lightmaps. While making fully dynamically lit environments in Unreal 4 is a possibility I found that the performance loss is not worth the time saved by not baking lightmaps.

I kept the lighting simple, contrasting small "gold" light sources with the ambient blue color. Instead of lighting the level as a whole, I created several "small" scenes. This makes the level look less "art directed" and more like a real city would. I also placed some strategic light sources to highlight the wet look in some areas. While I imagine this kind of "wet" look will be abused until everyone hates it in the near future I kept it very simple and restricted to where it made sense and would look good. 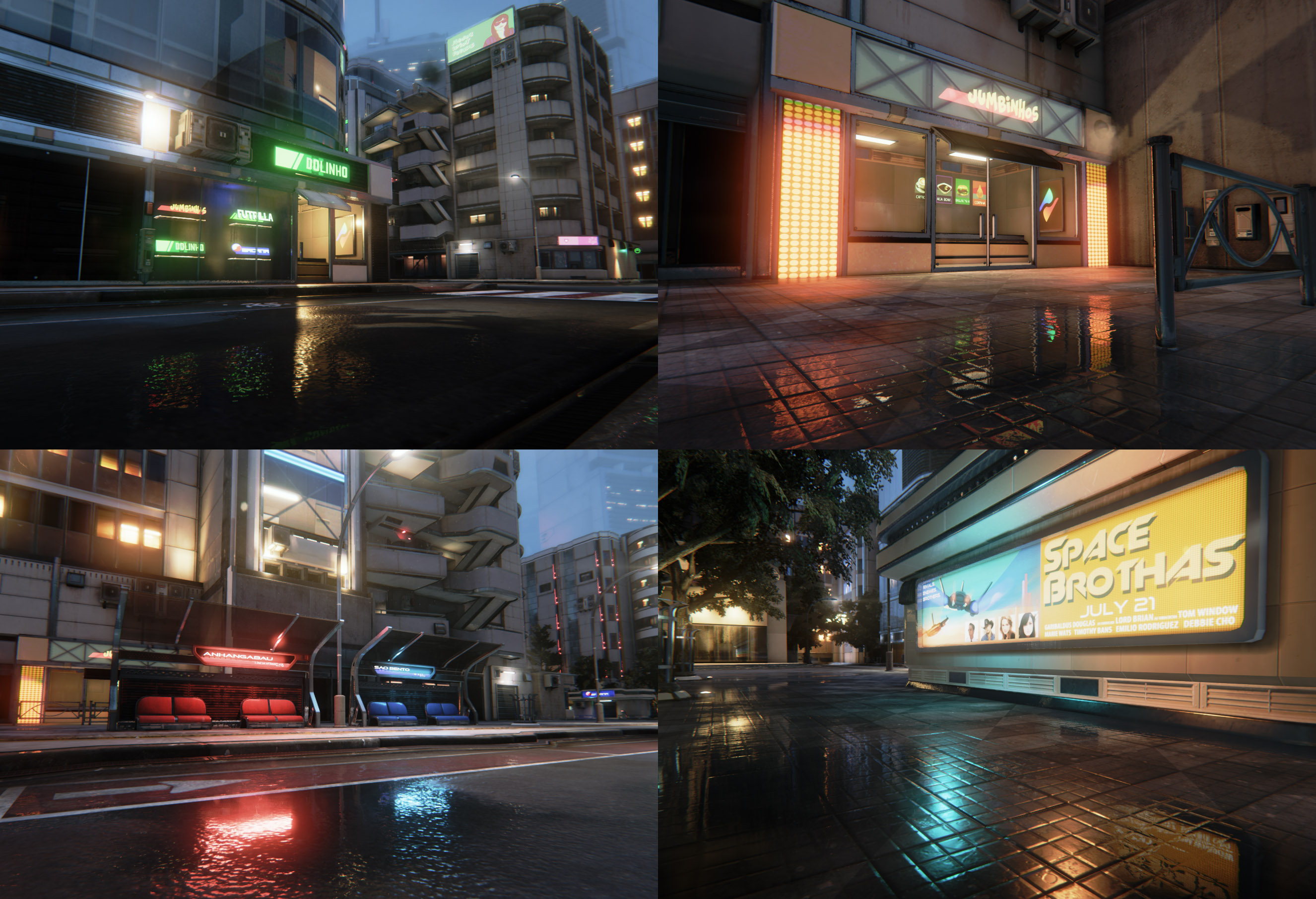 When it comes to Post-Processing, I like to keep image adjustments outside the engine to a minimum. I really took the time to tweak the exposure values to get a good range of details in shadows and also to avoiding bright areas being way too bright. This can be accomplished by a combination of tweaking exposure and Tint/Contrast settings under a Global Post Process volume.

One of the last steps to finalizing this scene was to bring a few screenshots into Photoshop, tweak the levels and saturation values until they were exactly what I wanted, and then create a lookup table for the color correction. However, for some reason I was getting horrible banding with the color correction enabled, so in the end I just placed my screenshots from Photoshop next to the viewport and tweaked the post-process values until both of them looked exactly the same.

This is the 10% part of the process that makes everything look 200% better. During this phase, I created small interest areas and dressed them with props, particles and decals. I also scavenged several pieces from unfinished scenes and from my initial blockout. One of the examples is the News Stand which I just polished the geometry from the blockout and applied final materials on it:

Again, never discard any ideas/assets, you never know when they might come in handy!

The light glows are simple particle emitters consisting of two emitters: A regular "round" glow and a horizontally scaled one to simulate anamorphic flares.

Some of the pieces used in the level: 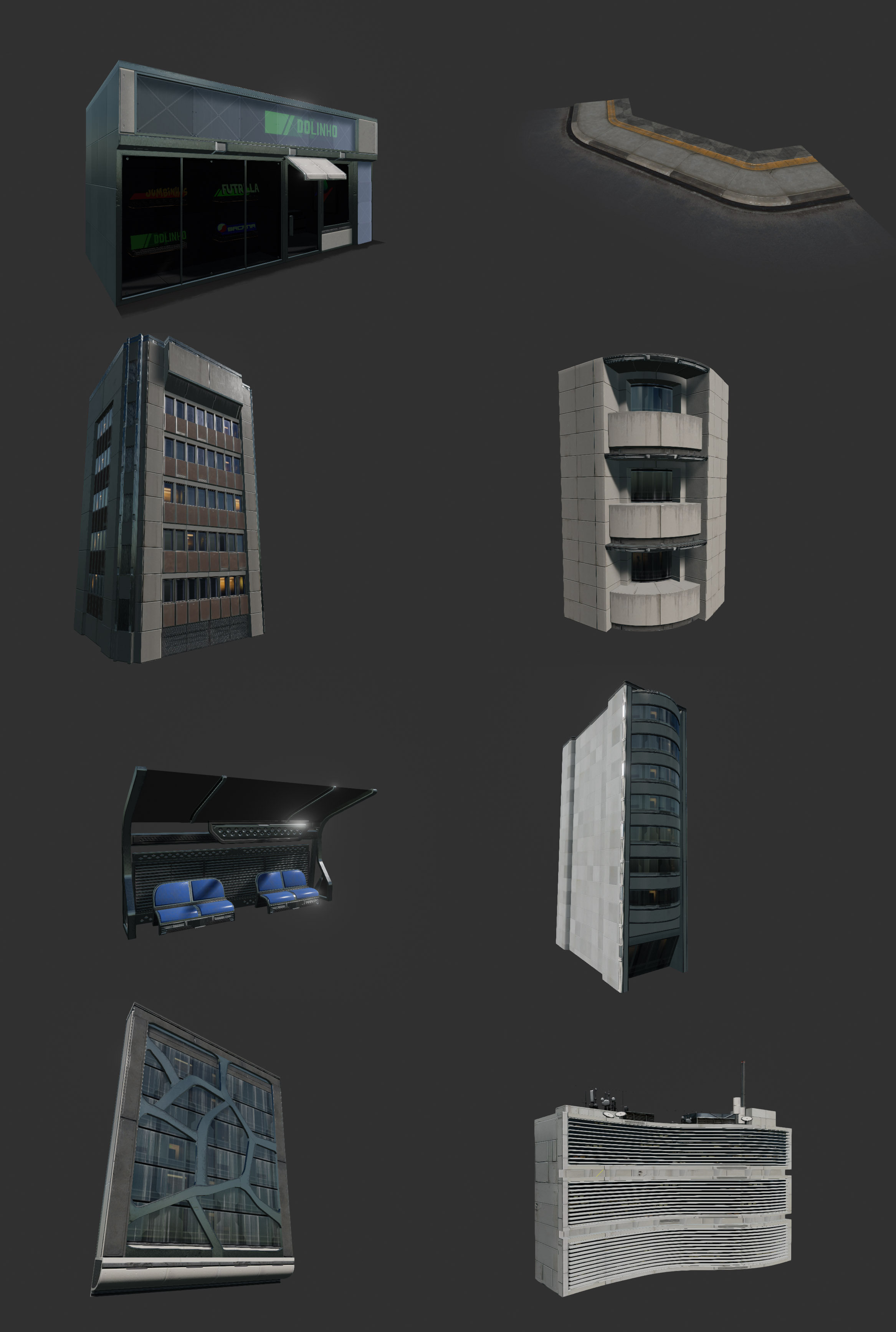 Now that was a very detailed break down. I’m sure people will really benefit from the information you just shared. Thank you for that! In the beginning of this interview you said that you learned a lot of lessons during the production of this scene. Could you share those as well?

Yes, I learned quite a few lessons with this project. Namely:

Very motivational and inspiring Minos. I’m sure it will be appreciated. Before we wrap this up I have to ask about something terrible that happened. Something unforgivable (even though the above makes up for it but just a bit). There’s an Polycount logo in scene but Hurg is missing. What blasphemy is this?

Haha! Yeah my mistake… While polishing the assets for the final version I removed the Mapcore sign from the building I was using it on (so that not every instance in the map had the sign) and completely forgot to add it back while rushing to finish the scene. I only noticed that when I was publishing the video.

It’s really a shame because that logo looked awesome in the level!

Just kidding Minos. I think everybody will agree that the time you took to write this down will be appreciated by and helpful to all (aspiring) designers. So in short, thank you again.

Thanks for the opportunity Sprony and I hope you guys learned a thing or two with this! 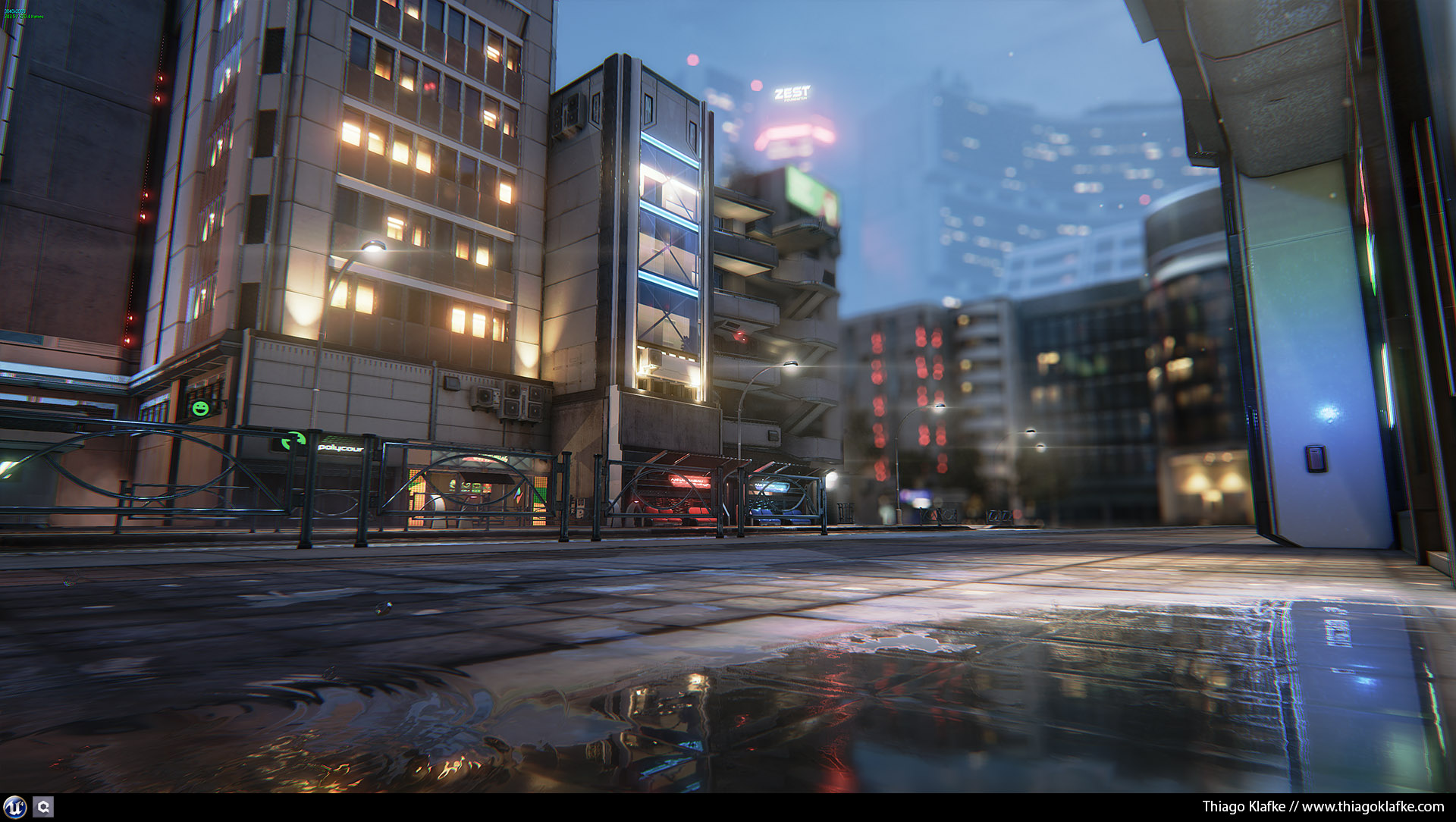 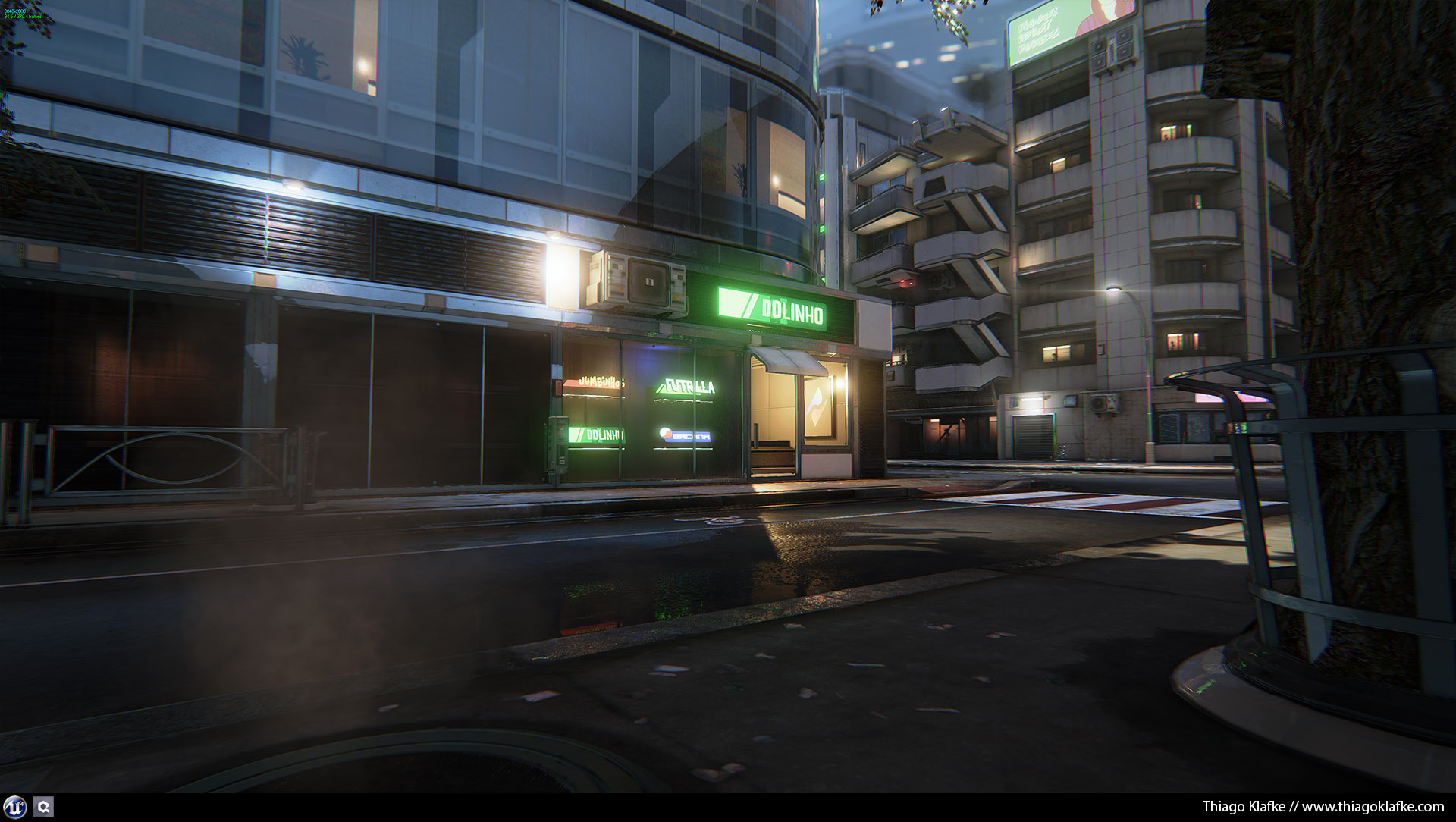 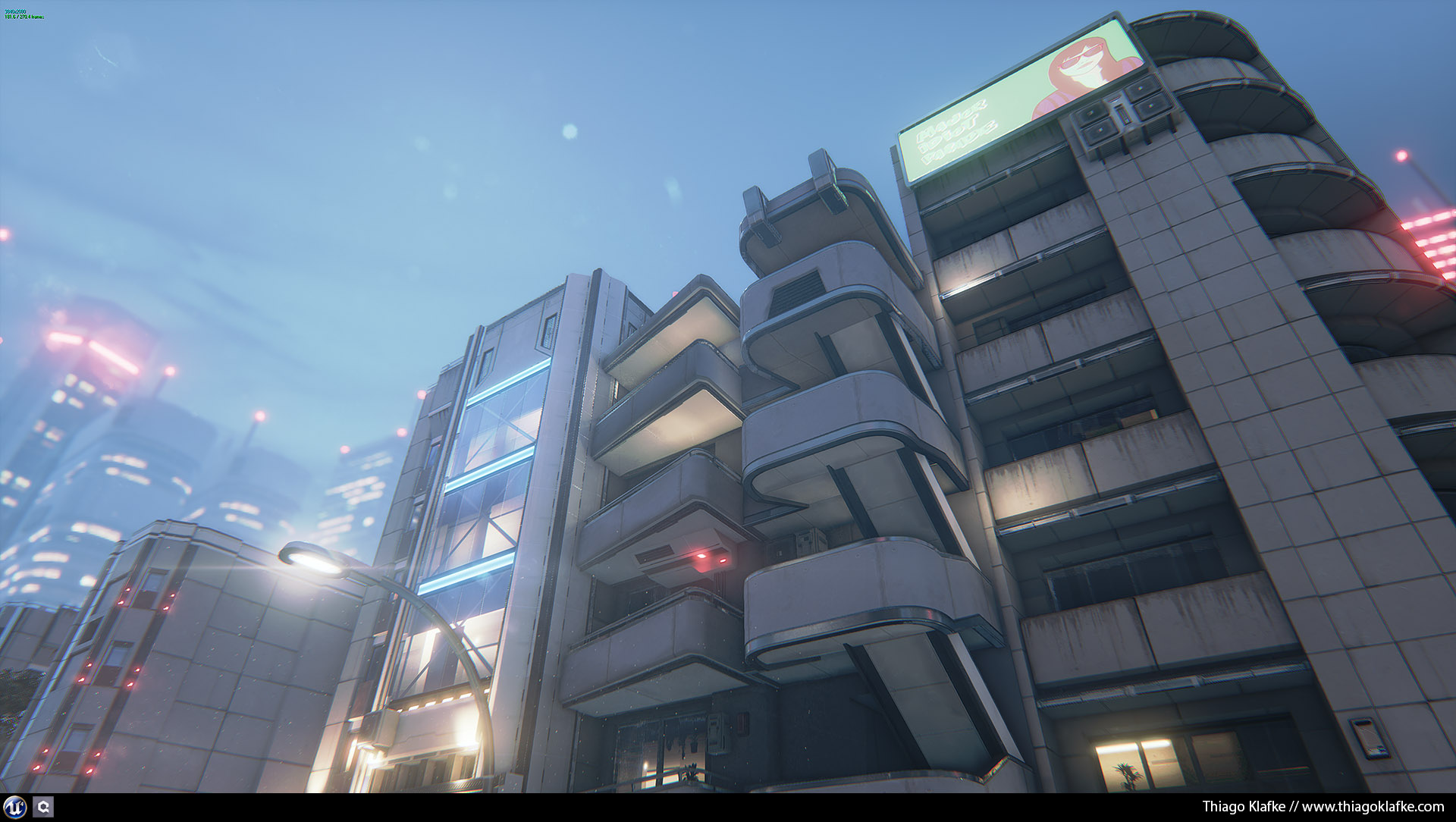